And Then the President Died 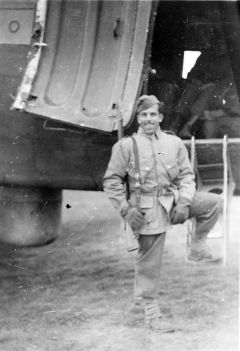 Da Costa preparing to board the C-47 to Nice

My war story contains no shooting — no explosions — no violence — and no killing. However, there is a death involved.

I was a radio operator in the recon section of the 312 Engrs. Early in April, 1945, I was told by my C.O., Capt. Hiram Williams, that I had been selected to go to the Riviera for seven days of R&R. On April 10th, I reported to 87th Division HQ and several of us got on a truck and were driven to the airport in Mainz, Germany. We remained at the airport for 1½ days waiting for the plane (C-47) that would take us to the French Riviera. We finally took off about 10:00 A.M. on April 12th, landed in Marseilles for refueling and then on to Cannes. The officers stayed at Cannes for their R&R, and the enlisted men boarded a bus for Nice, France, which was about ten miles away. 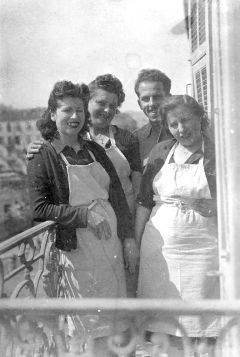 I was given Room 26 at the Hotel National, which was on the main street that had been renamed Victory Avenue. There were two men assigned to each room. After we got settled in our rooms, we had dinner at the hotel. The first thing I did after dining was to find a scale. I weighed myself and found I had lost 22 pounds. I had left the States weighing 163 pounds, and after six months overseas, I now weighed 141 pounds. I realized that was probably the reason they had given me the seven days of R&R.

There were no autos on the streets of Nice. They used horse and buggy for cabs. Some bicycles with trailers were also used as cabs. I rented a bike and pedaled my way around town for a day.

I woke up one morning to an eerie silence. Something was wrong! It was too quiet — sort of like a ghost town. I went outside and no one was on the streets. Nothing moved — the shops were closed and black crepe hung over the windows and doorways. I went back into the hotel lobby and that is when I learned of the death of President Franklin Delano Roosevelt. For that reason, they had declared a three-day mourning period and the entire town of Nice had been shut down.

For the next three days there was nothing to do, so every afternoon I walked down to the beach area and did a little swimming. The Mediterranean waters were still cold, but the air was balmy so that didn’t stop me from going into the water. 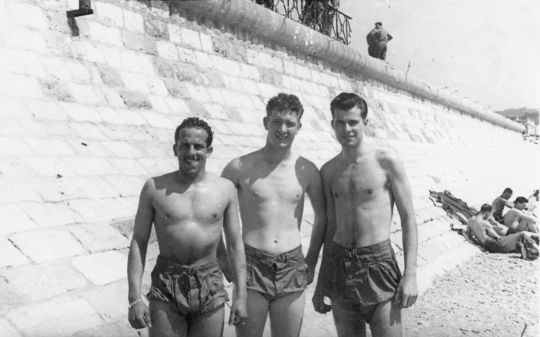 Things were very expensive in Nice, and I was low on funds. I went to the Casino in Monte Carlo which was located in the Hotel de Paris. There I sold a new deck of playing cards for $50.00, and three cartons of cigarettes at $20.00 per carton. I returned to Nice with enough money to finance the remainder of my stay.

We left Nice on April 20th. There were no planes available, so we had to take a train heading north to return to our unit. It was a two-day ride to Luxembourg. There we notified our units, and waited for transportation back to the front lines. We later found out that the 87th had been on the move since we left them.