During the military action in Europe some officers and a few noncoms were given passes to nearby cities such as Paris or London. While we were in Camp Oklahoma City at the end of the war, a few of us privates decided it was now our turn to visit Paris. This small group contained two from Texas, one from New York and me from Los Angeles. Producing a pass was quite easy, and you can see our results below: 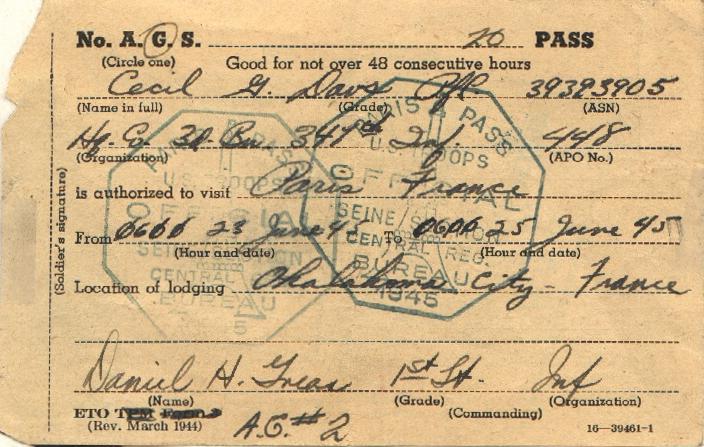 An obvious error in my pass was that my real serial number, 39707419, was intentionally not used. When we left we took along a few items from stores to use for trading and started on our trip to Paris.

The trip was mostly uneventful as we stopped in various occupied towns along the way for meals. Only in one case did we have problems, that was when one of the local guys tried to crowd into the chow line in front of one of our Texans. A fight ensued but it was held away from my sight. We arrived in Paris with no room reservations but received local directions to “Place de Concorde”. The passes worked and we were billeted in a local hotel with maid service. 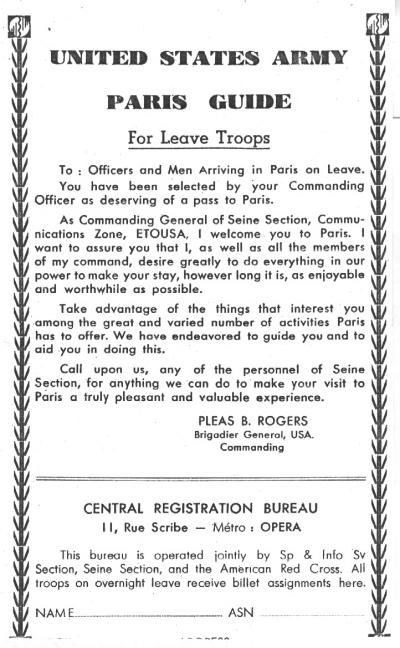 What subsequently occurred is obviously only one story from Paris as our men sought relief from the war. During the first day, as we were walking through the streets and alleys of Paris, our member from New York disappeared down a side street. I recall that his name was Romeo and maybe his name had some connection with his action. That evening we commandeered a taxi and a local Frenchman who spoke English to translate for us as we then visited a few nightclubs and street gatherings where Americans were warmly welcomed. Later that night our driver and French translator decided to turn us over to the MP’s. I guess they must have thought that we had seen enough of the city at their expense. I alerted the Texans and we quickly found a subway and headed back to the hotel. 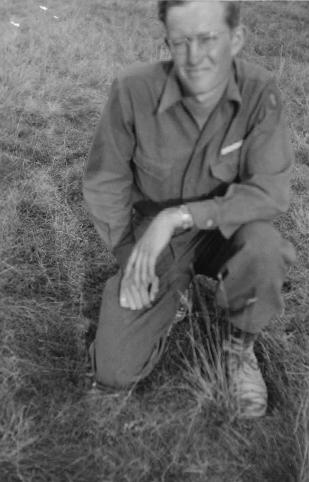 From the underground message center we found out that a convoy was heading back to Camp Oklahoma City in the morning, boarding near the Eiffel tower. By luck we were able to climb under the seats for our return trip to camp. I don’t recall if Romeo made it back or not. Our happy ending to the trip was the greetings by our sergeant when we arrived in camp. He had covered for us and I must thank him again after all these many years.