The 87th and Los Alamos 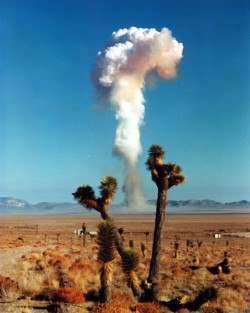 The DeBaca event at the Nevada test site in 1958

As the war ended in Europe (May 8,1945), and after 134 days in combat, we received a message from General Culin, our 87th Division Commander, on our way back stating that after arriving in the states we may be going to the Pacific in support of the invasion of Japan.

Meantime, under strict secrecy, Los Alamos was continuing to develop the atomic “bomb” and as we know we dropped two “bombs” over Japan that quickly ended the war.

Some years later I joined Los Alamos to again contribute to the war effort, but this time to the “cold war”. From recently released classified documents about the possibility of continuing to fight in the Pacific we find the following from B. Cunningham’s (C-347) review of the book “CODE NAME DOWNFALL” by Thomas B. Allen and Normal Polmar, which appeared in the Golden Acorn News of June 1998:

“Follow-up echelons were to be formed from six infantry divisions transferred from Europe: First Army; 5th, 44th and 80th Divisions. Eighth Army: 4th, 8th and 87th Infantry Divisions. Their invasion would follow operation Olympic and include the invasion of Japan at Kyushu.”

These events were recently discussed by Kaidy.

I joined Los Alamos after graduating, and began working on the design of a “bomb” similar to those exploded at Trinity and over Nagasaki. It was quite an experience to work on the same type of “bomb” that had actually ended the war in Japan and therefore ensured that we, the 87th and others, would not have to invade Japan. The “bomb” that I helped design was tested in Nevada in 1958 with a yield less than Trinity but with the same kind of destructive power. The dramatic effects of the explosion of an atomic bomb can only be realized by one that actually observes the event. I had that opportunity to do so in 1958.