The Bulge, The Siegfried Line and The Rivers

Our Division was called upon by Gen. Patton to help close the salient (The Bulge) effected by the Germans in the Ardennes region. After accomplishing this task we would then penetrate the Siegfried line and proceed to cross the Moselle and Rhine rivers.

Our division moved some 300 miles in less than 24 hours from the Saar valley to reach the area near Bastogne to afford relief for our soldiers fighting off the initial attacks of the Germans in the so called “Battle of the Bulge”. As I recall we drove in trucks, for part of the trip, and then walked the remainder until we reached an area near Libramont. Since I was tired and sleepy I missed the loss of my 45 caliber side arm (AT Co. issue) that occurred some time during the truck ride. On informing the Lt. when we arrived near Libramont he reminded me I could be court marshaled for losing a weapon but instead let me find a rifle from a nearby dead comrade. After arriving late at night, in the snow and cold, we set up our 57mm antitank gun along side a road to prepare for any possible German tank attack.

The following day we marched along a road, towards Bastogne, passing burnt out trucks, tanks, wagons and tired men of the 101st airborne. We saw no direct front-line combat at this time but plenty of incoming shells and mortars. One incident occurred in a small town in Belgium where the shelling was intense. After hitting the dirt I found that a piece of shrapnel had barely missed me and tore a hole in my canteen belt. I believe it was in the same town that we took shelter in a building that evening where the roof had been blown off and four of our comrades lay dead under a canvas near the door. That evening two of the German ladies of the house serenaded us with a rendition of Lilly Marlene.

The AT Company’s role is to destroy enemy tanks. I want to describe a couple of experiences we had in setting up our 57 mm cannons but in neither case did we get a chance to shoot at a tank. In one instance we needed to dig in the gun at a location in front of a building where the ground was frozen. Being ingenious, or maybe ignorant depending on your point of view, we decided to use some acquired dynamite (c-4) to blow a hole in the frozen ground to assist us in setting up the gun. Not knowing what we were doing we simply stuck a fuse in the block, buried it down a few inches and lit the fuse and ran for cover. The dynamite worked fine and saved us many hours of digging.

In another instance we located the gun near a road behind the front lines but camouflaged in the snow. While I was the only one on guard duty one night, but I had a fire to keep me warm, General Culin came down the road from the front lines in his half-track and jeep escort. After driving by he backed up and asked me to come over to talk to him. He noticed that I had remained near the fire and did not jump up and salute as a private should. My reply was that I had not been very observing and was sorry that I had not seen him. He then drove off apparently happy with my answer.

At one point during the Ardennes campaign we raced the British (or French?) for the capture of St. Hubert, Belgium, a critical town on the Bastogne-St. Hubert line. As we entered we found that the town had recently been evacuated by the Germans. An incident in St. Hubert that I recall was my being assigned to Hq’s Co. as a possible messenger. In the house where we were originally bivouacked the lady of the house said she would sleep in her rocking chair and I could use her down filled mattress and bed. Guess what?, that was the night they picked me as a messenger. So instead of sleeping on a down mattress I slept on the floor at Hq’s building until they sent me out in the middle of the night to establish contact with one of our units.

As we know many of the line infantry companies were being sorely depleted by fierce combat during the Battle of the Bulge and the threat of tanks was dropping rapidly. I was therefore transferred with eight others of our AT Co. to I Co. of the 347th Regiment. I had recalled that this occasion had occurred on my birthday (Feb. 20) but the daily records, as provided to me recently by Captain Miles (I-Co. commander), say Feb.18th, 1945 and the transfer occurred in or near the town of Manderfeld, Belgium. So now I am in a rifle company and we turn our sights to attacking the Siegfried line and crossing the Moselle and Rhine rivers.

In our attack on the Siegfried line, three instances come to mind. First our initial attack on the bunkers from their backsides. When I was attached to I Co. from antitank I was equipped with a bazooka and a partner to load the shells. From the top of a tree covered hill, that dropped down to the back of the bunkers, we were ordered to fire on the pillboxes. Unfortunately my first round struck a tree only a few feet in front of our position. It was our Lt.( 3rd platoon, probably Lt. Watson) who then ordered me and my partner to move ahead of the squad and down the hill to attack the pillbox more directly. In this process my partner inadvertently loaded a smoke round instead of the normal HE rounds. The ensuing smoke blew back up the hill obscuring the advance of the group of soldiers to my right. As you may have expected I was then chewed out by their Lt. and we quickly returned to using HE rounds. We continued to advance and captured the pillbox. Their was a German SS soldier that we had shot during the attack that we attempted to offer first aid, this particular SS soldier hated our guts and fought off any of our attempts to help him.

The next instance I want to relate occurred as my squad was attempting to encircle a machine gun nest by the orders from Cpt. Miles (see page 76 of the 347th Regimental Report), and then to rejoin our company near the top of the hill. It was getting late by the time we reached the position of the German machine gun nest. Fortunately for us our first scout had his sub-machine gun ready as he was leading us up the tree covered hill in single file. Suddenly the German machine gun opened up before us with close in fire. I must admit that at that moment some of us panicked and headed back down the hill not realizing the danger of tree mines. As it turned out our scout and probably others had stood firm defeating the German machine gun and then making their way to the company location that night. I and my other frightened comrade ended up sleeping in a medical tent behind the lines that night and making it back up to the company location the next morning. We accompanied the cooks with some much appreciated hot food for the day.

The final instance I want to relate was sad since it ended up with the loss of one of our Sgt’s. I am not sure just how he got shot nor his name (It may have been 1st Sgt. Lighty). All I remember is that we were near a pill box from which we extracted a steel bed frame on which to carry him back to the rear lines. By March 14th we were through the Siegfried lines and on our way to the rivers.

Oberspay Germany, is a small city on the Rhine river, where we were holed up for a couple days with the Germans sniping at us from across the river. At one point some of us decided that we deserved a hot meal, so as some of the guys commandeered a chicken from a local house a couple of us then proceeded under cover to a general store near the river bank. In this store we located what looked like a bag of flour and headed back to help prepare the chicken. When the chicken was well cooked we eagerly bit into it but noticed that it seemed awfully tough. Guess what, what we thought was flour was actually cement and the chicken was almost impenetrable. What little chicken we salvaged we did enjoy. During this time, when we were trying to avoid sniper fire, but still enjoy the outdoors, Sgt. Sprinzen crossed an open area near me and got killed. This sad event dampened the effects of a sunny day on the banks of the Rhine.

Crossing the rivers, the Moselle and the mighty Rhine, one of the incidents I remember is driving down towards the river, probably the Moselle river, sitting on the back of a tank, with some wine and eggs gathered from the previous stop. At some point the front tank hit a road mine which knocked off it’s track. Sure enough it was an ambush with Germans on the hill to the left side of the road attempting to stop us from advancing towards the river. Jumping off the tank, with a coat filled with wine and eggs was of some concern, but getting under cover was of more concern. I dumped the wine and eggs behind a tree and started shooting. Later we converged down near the front tank to assess our situation. Apparently we had learned earlier, from a captured German soldier, that their were no mines in the road ahead. You can imagine the punishment this individual received for his lies. Later that day I was with my first scout as we explored a canyon just off the road near the downed tank. We noticed red wires running up the canyon sides and connected to some berns at various intervals. Our scout had his sub-machine gun ready as we called for the Germans to surrender. Some did not respond without weapons so they got shot. That evening as I held guard duty on the edge of the canyon, just off the road, I could hear one of the wounded Germans crying for help, their was nothing I could do about it, and by morning I assumed he had died.

The actual crossing of the Rhine was very dramatic. The artillery bombarded the opposite shores and dropped smoke over the river to hide our crossings. I was assigned to a motorized boat with a planned crossing from Brey to near the town of Brauback, where a castle stands. To start with one of the men, I think it was an officer, stood up in the front of a boat which was about to cast off before us. Unfortunately he received a round in his chest. When we reached the opposite shore of the Rhine we quickly dug into existing foxholes as we regrouped to attack the town. In the town I received a rumor that some one named Davis had been killed in the river crossing. At the time I was sure glad that it wasn’t me, but I am sorry to say it was Pfc. Harry Davis killed in Brey on the 22nd of March 1995. 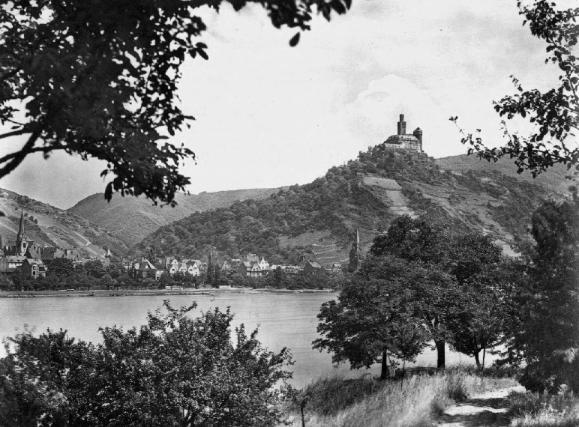