The Dash Across Germany

The events from March to May went quickly as we mounted trucks and other vehicles to streak across Germany and end the war. I can recall watching from a hill as our canon companies bombarded a small town to reduce their resistance for our entry. In another town we approached it from the opposite direction commanding sentries along the way to “put their hands on the heads” and surrender. As we entered this town it was morning and we were informed of a squad of German soldiers sleeping in an upper room nearby. When we reached their room they were surprised from their sleep and simply surrendered and put on their clothes and that was that, no shooting. Later that morning we saw a group heading out of town from near an AA battery at the edge of town. I don’t think we even had a good shot at them but we tried. The war continued like this capturing villages and entering bombed cities as we moved across Germany. The 3rd Battalion cleared Theuma and Oberlosa and entered Oelsnitz for a short stay. 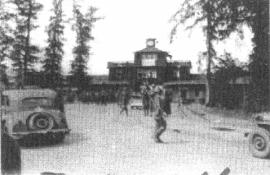 On April 9th I was transferred to Hq.’s company, 347th Regiment, near Fambach, Germany. Around April 12th Buchenwald was captured and this atrocity was exposed to the world. From Saalfied, Germany on April 13th we were required to visit Buchenwald to observe man’s inhumanity to man. On entering the area ex-prisoners were handing out name tags of victims and some paper money (which I still have). Inside the compound we observed the ovens and cans of ashes with tags attached. The area where the many bodies had recently been buried was evident. Some of the starving inmates were still there. To me the most sickening site was the so-called hospital, where shelves of patients were stacked after being used as guinei pigs for various diseases. While dying they were put in a concrete pin at the back of the so called hospital to thrash around till dead. In the nearby camp office we saw lamp shades made from human skin. 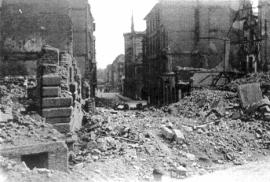 The most impressive effects of bombing that I saw was in Plauen, a large industrial city in the heart of Germany, that had been bombed to near oblivion by our air force. We entered Plauen on April 16th. There was still life there and I recall finding a vender of bread in a stall on one side street trying to sell his wares to starving citizens. With my trusty rifle I convinced them to give some of the bread to the children and others nearby.

We were finally stationed in Tannenbergsthal at wars end, May 8, 1945. 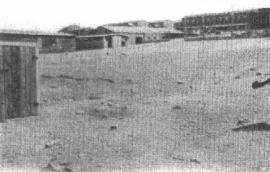 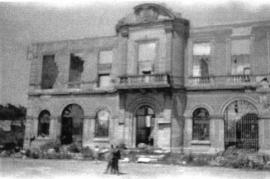 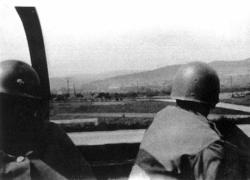 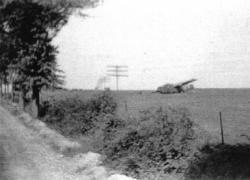 The photos is this article were taken by Cecil
using a “liberated” 127 Compur camera.