The Last Days of the War

Near the end of the active fighting around Olznitz, Germany I was temporarily attached to 3rd Battalion HQ’s. Of the 347th infantry regiment as a radio operator. We ended up the war stationed in Tannensbergsthal, near the border with Czechoslovakia. I recall operating radios from a location, in a tower, near the middle of town. In this town we accepted the surrender of probably more than a 1,000 German officers and soldiers. The officers had an entourage of vehicles and many women followers. We separated the men from the women along a natural ridge, and path, that ran through the center of a valley in the center of town (a winter resort town). It was interesting at night, while on guard duty, to try and keep the men separated from the women followers. I remember that near this location we had piled up hundreds of captured weapons, mainly rifles. The pistols were generally considered as trophies. Any wine found, say hidden in haystacks, was also considered as needing to be liberated. While in Tannensbergsthal I decided to retrieve one of the Mausers (the German service rifle, equivalent to our M1) to bring home. It required cutting the stock in half and then carrying this weight in my duffel bag the rest of our time in Europe. 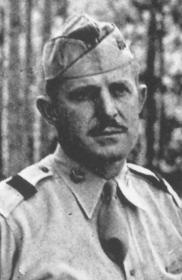 This end of the war experience was the setting for my relationship with Maj. Withers, the commander of the 3rd battalion. At one point I was assigned as his radio operator as we reconnoitered the surrounding area for possible enemy resistance. I sat in the back of the jeep with the radio. As we traversed up a long hill we were fired on from the surrounding woods. We all jumped out and I recall holding on to the mike. Maj. Withers then ordered a 90 mm anti-tank gun to come forward and fire a few rounds into the surrounding forest. It worked, the Germans, in this case just kids, came out with their hands on their heads. This turned out to be our last day of conflict. I should also mention another incidence were I was again Maj. Withers radio operator. Earlier, near the end of the war, we were passing some tanks that were moving too slowly down the road. We tried to raise the tank crews on the radio but with no luck, so Maj Withers had us ride up to the tank’s side while he kindly chewed them out.

As a further comment on the major he seemed to be very interested in horses. I recall one day, when we were assembled some where in a field in Germany, the Major came by with a horse pulling a carriage with a “fringe on top”. Needles to say, we the troops, all yelled something like 48, 49, 50 some !!!!. At that time we also heard that he planned to make use of one of the forty and eight train cars to transport his horse and carriage to the coast. Talking with John McAuliffe (M-347th), at our 50th reunion, he also recalled that Major Withers came riding bye on a horse. Someone else at the meeting mentioned that Maj. Withers tried to get his horse shipped to the states, maybe he did? I want to thank Major Withers for ending the war for me and I expect that he contributed in many areas to the success of our regiment.

Maj, Withers was such an interesting character that other stories about him are important. One story I gleaned from the GAN (41/2), by Paul Hinds (B-347th), was his observation of the Maj. coming to the front in a tank to observe the battlefield situation. At that time he was the 1st Battalion’s exec. Officer. Another incident comes from the “History of the 347th Regiment” where Maj. Withers crossed the Mosel in a weasel, during the conflict, to establish communications with the forward companies.

Any other stories about Major Withers would be greatly appreciated.

Private Meadows and the author examine a 57mm anti-tank gun during training at Ft. Jackson, SC