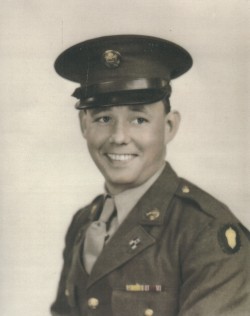 My vivid remembrance leading to the Battle of the Bulge was the subzero biting cold, and the freezing trip in open trucks from the Saar basin campaign to Belgium. Our first battle assignment in Belgium was to take the town of Moircy, the date was a few days after Christmas.

As we crossed the frozen fields, our initial attack was met with enemy artillery and mortar fire that swept the fields leading into the town. Another GI (name unknown) and myself were able to capture several prisoners who came out of the woods to surrender. One was a young beardless jerry, about my age (I also hadn’t begun to shave). In trying to move these prisoners back to the rear, we were hit by an enemy mortar barrage. Several of our prisoners were wounded by their own shells and one was killed. Finally, there was a short pause in the shelling. We then left the dead man and (march schnell) double-time to the open field and quickly moved the prisoners to the rear.

After turning over the prisoners, I rejoined my unit. We then set up a machine gun in a barn at the far end of town. The right wall of this barn was constructed of corrugated metal. Our water-cooled 30-caliber was positioned just inside an open doorway at the rear of the barn. This gave us an excellent field of fire that covered the rear fields and hedgerows. A building to our right was on fire, and as darkness fell, this fire afforded some illumination of the snow-covered terrain. The two of us, Jay Morgan in position as gunner and I acting as his second gunner, protected the rear of the town. We talked in hushed tones about the possibility of a counterattack and we waited.

Later during the night, we could hear the faint sound of voices carrying over the cold air — they were not speaking English. Unexpectedly, from a dark hedgerow to our right front, we heard sounds then movement. The outline of one soldier came out, followed by a full squad of men. It was the enemy in their long dark overcoats and coal scuttle like helmets.

Taken by surprise, they never had the opportunity to return our fire. Several men, who were not hit by our machine-gun fire, tried to make a run for it to the next hedgerow. With my carbine at a rear window, I picked off the runners. There was no movement on the field — their counterattack went nowhere.

Suddenly, there was popping noises all around us. Farm equipment, harness, tools, etc. Hanging on the wall to our left began falling to the ground. A heavy piece of timber, it seemed like a huge wooden door or a work bench in the darkness, fell and pinned me to the floor. Struggling to free myself from under the timber, I managed to lift it off my back. Morgan called to me that he was hit. Dazed and blood running down the right side of his face, he continued to fire. Looking around in the dark, I saw the metal wall to our right was now full of bullet holes. Fire light from the adjacent burning building was shining through the holes, making the wall look like a sieve.

I now realized there was an enemy machine gun in the right front hedgerow, covering their infantry’s advance, and was now firing directly at our position. Morgan continued returning fire until our ammunition ran out. Now, mortar shells were bursting directly in front of the open doorway. Fortunately, neither Morgan nor I were hit with shrapnel; however, from the bullet that hit his helmet, Morgan was now semiconscious and going into shock from loss of blood.

Half carrying and half pulling him, I crawled to the front door. Some GI in his “infinite wisdom,” had parked a 2 1/2 truck parallel and against the front door, blocking our egress. What to do? We had only one choice. Crawling underneath the vehicle, I dragged Morgan with me into the open road. Fortunately, I recognized the red cross arm band of a medic down the street, and his quick examination revealed that a bullet had struck Morgan’s helmet and grazed his skull, causing much bleeding. The medic said, “You’re a lucky S.O.B., an inch to the left and you would be dead…!”

Morgan’s luck ran out several months later — he died in action. By any standard, Sergeant Jay Morgan was a true hero.

May he rest in peace.

“now night her course begun, and over heaven
Inducing darkness, grateful truce, impos’d
Her silence on the odius din of war;
Under her cloudy covert hath retired
Victor and vanquish’d.”