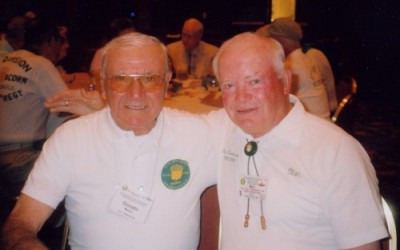 This is not the usual war story that one is most likely to read in this column of "As I Remember It". More often than not those stories relate to the soldier's participation in the harsh realities of battle, telling of his experiences entwined with those of his fellow...

Mac and the General

St. Vith was leveled to the ground. What was left of Company M was crammed into a dingy. damp cellar. The combined odors of dried meat, soggy potatoes, dirty bodies, gun oil and improvised oil lamps created a depressing, nauseating effect. 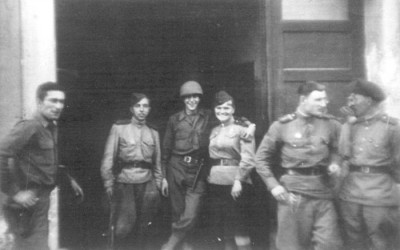 Just as the war was ending - I believe we had just taken Falkenstein, Germany - I was told (but did not personally witness) that an American-made Piper Cub with Russian markings had flown over the front and landed. A Russian Major got out - spoke English - and asked...

December 10, 1944 We were taken by truck from Metz to within 10 or 12 miles of the front. One truck stalled in front of us just as General Patton pulled up behind us in a jeep. I was about 10 feet from the General and got a good look at him sitting there with his...

Some years ago Melvin Brenner wrote this letter to the editor of the Golden Acorn News. Dear Editor, I have been in awe of all you guys out there who are able to recall in great detail the specifics and chronology of our adventure in the ETO. I cannot do that but...

February 1945 Somewhere in Belgium or Germany near the Siegfried Line   One day the captain of our company summoned and ordered me to lead a daylight patrol in thick woods, which I believe were in the Ardennes Forest. He told me to pick five men and lead a...

We Are the Fortunate Ones

Something that has always bothered me after my limited combat experience with L Company, 347th, was what is our responsibility to the families of those who were killed in combat? We who write for the Golden Acorn News are the fortunate ones - the survivors. I often...

This event occurred about a week before we were sent to intercede in the "Battle of the Bulge" but I would like to relate it in support of the brave men who died there where by fate it could have been me. At the time of this event I was a member of the 347th Infantry...

During the military action in Europe some officers and a few noncoms were given passes to nearby cities such as Paris or London. While we were in Camp Oklahoma City at the end of the war, a few of us privates decided it was now our turn to visit Paris. This small...