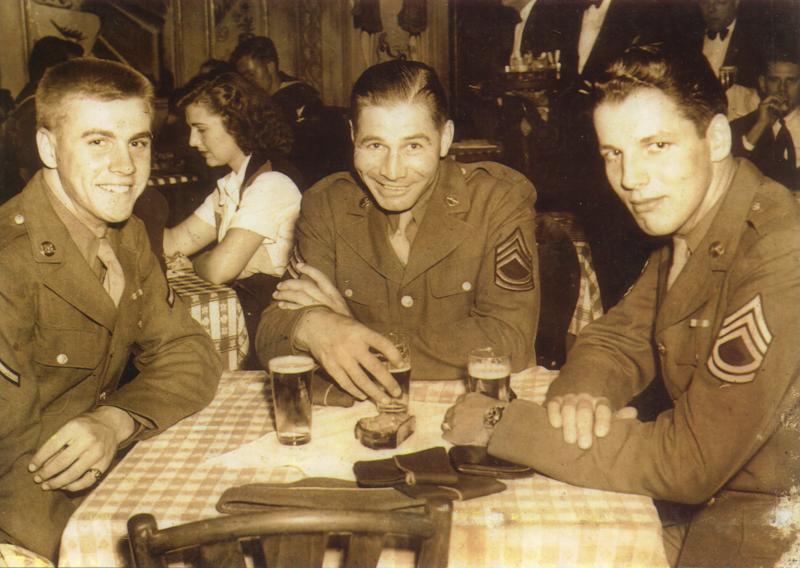 On the left is our past National Commander, Louis Gueltzow, and Carl Johnson is in the center. I am on the right. It is a souvenir photo taken in a place called “The Broadway Brewery” a little night spot at 45th and Broadway in New York City. I was never quite sure of the date but if the Queen Elizabeth sailed on Tuesday October 17, 1944, as the 87th History Book indicates, then it had to be Friday October 13, 1944.

Word had come down to us that passes would be issued to as many troops as possible, as orders to ship out were expected. Louis, Carl and I decided to take a chance to wait and get our passes on the following day and have Saturday night in New York City. When word came late Friday that orders had been received to move, it didn’t take long to get into uniform and head for the big town but it was rather late when we arrived. The “Broadway Brewery” was the first joint we found. We were having fun and I don’t think we had to go any further for ‘entertainment’.

Carl made one of the last buses back to camp. Louis and I joined several other stranded GIs, pooled our resources and hired a cab to drive us back to Camp Kilmer. We arrived in the camp area just after reveille. The rest is history.

Sunday morning we boarded the Queen and as part of the duty battalion we were assigned cabin bunks and did not have to stand any shipboard drills.

The main purpose of this story is to let the members know a little bit about Louis Gueltzow, the 19-20 year old GI. This is not about heroes or heroics but about a young man, one of thousands, the backbone of the infantry, the ones who got the job done, without fanfare and mostly without recognition.

Lou came to D-345 as a replacement from the Air Corps about April, 1944. He quickly became a real asset. I last saw him on or about January 6, 1945 in Belgium and we would not meet again until the 87th reunion in Cherry Hill, New Jersey in 1985. However, while hospitalized in 1945, I received several letters from him. Perhaps a few short excerpts from a letter dated October 10, 1945, tells it best.

“Yes , I really was lucky with that wound of mine but hell, you know me, a bad penny always returns. After you guys got hit in town, I had to go up a little later and haul wounded out of town and believe me it was no picnic either. I got five bullet holes in my jeep and one shot killed a wounded fellow I had on the hood. He was from C Company.”

“C Company only had about 17 men alive, I was told. I hauled many back on my jeep and trailer. There were only about eight of us left from the platoon, that is from the ones that went over with us.”

And that is only about one incident. He survived many others until the end of hostilities. Louis Gueltzow was and is, “One hell of a good man and soldier.”

I last heard from Lt. Carl Johnson in October, 1945. At that time he was stationed at Camp Butner, North Carolina, Company M, 22nd Infantry. The three of us planned to get together and then we lost track of each other. It was not until 1982 that we learned that Carl was killed in Korea.