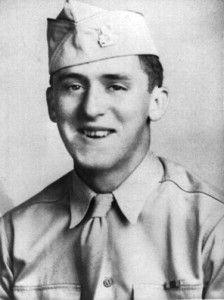 Stanford Lee Arnold was born on 4 Aug 1923 in Nochaway, Randolph County, Georgia, where he completed his education graduating from Shellman high school. Stanford was the son of William I and Emmie E (Halliday) Arnold. His father served as a County Commissioner from 1935 to 1953, and was instrumental in building schools, hospitals and rural electrical utilities. Stanford, a tall, slender man 6 ft tall weighing 140 lbs enlisted in the Army on 12 Feb 1943 at Fort McPherson, Atlanta, Georgia. He was assigned to Co E, 345th Infantry, 87th Division, the Golden Acorn Division, which was sent to Europe as part of Lt Gen George Patton’s 3rd Army. He received his training at Camp McCain, MS, and Ft Jackson, SC, and was promoted to Staff Sergeant. While at Ft Jackson, Staff Sergeant Arnold earned the Expert Infantryman Badge.

In Europe, now, Technical Sergeant Arnold and Company E became embroiled in the hotly contested Saar Valley and afterward entered the Battle of the Bulge in late December 1944 in the Ardennes region. During that time Arnold received a battlefield commission to 2nd Lt. On 4 Feb 1945, Lt Arnold wrote home:

“The weather is about the same, the snow is three feet but usually freezes over at night which makes for tough walking whenever you are moving around. Of course everybody is wet and damp but we are all getting by okay so far. . . . I am in a small room now with five other fellows & I am having quite a time trying to concentrate on something to write. By the way I am now somewhere in Germany nothing different from the countries that I have been except for the name. . . . I am still looking for your package & also a cake that Lois sent me but haven’t seen them yet. I only hope they didn’t get sunk coming over. . . . Well give my love to all & may God guide & bless us all.” 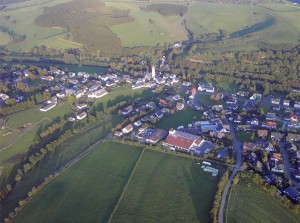 Olzheim, Germany looking west along the line of approach to hills where German artillery was positioned.

Four days later, on 8 Feb 1945, Lt Arnold and his men would attack the small town of Olzheim, Germany, just 4 miles from the Belgian border. The importance of Olzheim was the telephone cable linking the German high command with the western front, which ran through the center of the town. Without telephone connections, the Germans would be forced to use radio communications, all of which traffic the US could readily decode. As Jim Hennessey remembered it, “The night before the attack, Lt Arnold briefed us in a log bunker. Next day we had to run at intervals across an open field to avoid machine gun fire down a road towards [the town] and the hills overlooking Olzheim. A few Germans were lying dead on the road. As we were descending the hill, German shells began falling amongst us. [The men] scattered and later all ended up in the house. I saw an opening in the woods and ran and jumped a barb wire fence for cover. With a lull in the shelling I ran to the farmhouse.” The group in the farmhouse consisted of Jim Hennessey, J J Moore, Ryan O’Shields, Sgt Jim Howe and Lt Arnold.

From the citation for Lt Arnold’s posthumously awarded Silver Star,

“Lt Arnold set up a telephone in a building near Olzheim, Germany, and realizing the immediate necessity of filling the position when the artillery observer was delayed, took over and telephoned vital information to friendly artillery. Enemy tanks moved up and fired at point blank range at the building and enemy artillery was directed against it. With great courage and devotion, Lt Arnold ordered his men to the comparative safety of the cellar while he remained at his post and continued to transmit information until he was killed by a direct hit.”

Jim Hennessey remembers that he, J J Moore, and Ryan O’Shields were told “to seek shelter in the cellar of the house. Sgt Jim Howe stood on the first floor with Lt Arnold. They then took a heavy shelling. Soon we heard an explosion coming from upstairs. As we tried to go there, Sgt Howe told us it was no use. Lt Arnold was dead. . . . [He had been] killed instantly by a shell that pierced the walls of the house.”

Lane Barton of Vancouver, Washington, was an enlisted man who served with Company G [345th] during its attack on Olzheim. Barton later described the extreme accuracy of the artillery support provided for his battalion that day, after his squad had dug into the side of a steep hill overlooking the valley. From their vantage point, they spotted a column of German tanks speeding along a road far below. The forward observer gave his first order for fire and a short while later the rounds went rustling by overhead. Barton recalled: “The FO’s initial fire order put his ranging fire close to the middle of the column. He called; ‘Fire for effect,’ and three salvos of three rounds each burst in the middle of the tanks. One tank was hit directly. We could not believe our eyes. The FO acted as if the barrage was nothing out of the ordinary.”[1] It is very likely that Barton was describing the results of Lt Arnold’s last efforts.

Jay Compton, Lieutenant USN, grandson of Henry J Compton who succeeded Stanford Arnold as 2nd Lt in Company E, wrote in 2005, that Hank Compton and Stanford Arnold became close friends soon after they were assigned to Company E. When Hank returned home after being wounded, he took a train to Benevolence, Georgia, to see Stanford Arnold’s parents. He promised them that he would name his first born son after Stanford. Jay Compton’s father, Stanford Marc Compton is that son. Jay is now following the military tradition set by his grandfather and Stanford Arnold, as an officer in the US Navy.

That tradition however, did not start in World War II. Stanford Arnold was named after his great-grandfather Capt Thomas Quincy Stanford, Company G, 39th Alabama Infantry, CSA[2], who was killed leading his company in a similar attack against an artillery emplacement at the battle of Murfreesboro or Stones River on 31 Dec 1862. Quincy Stanford’s grandfather, Rev Samuel Stanford, was wounded at the battle of Eutaw Springs on 8 Sep 1781 during the Revolutionary War. It is this tradition of service and sacrifice that makes the Spirit of America and keeps it safe.

[1] Lane W Barton, Jr to John R Walker, re: Olzheim and FOS. Email message, Feb 23, 2000; taken from Bracketing the Enemy: Forward Observers and Combined Arms Effectiveness During the Second World War, PhD Dissertation by John R Walker, Aug 2009. Jim Hennessy remembers that the effort to establish observation posts started just before midday, which is consistent with the observation post established and directing artillery by 2:00 pm. Lt Arnold’s fire direction prior to the arrival of the forward observer would have directed the artillery against the tanks which being sent to drive he and his men away. These tanks could be those seen by Lane Barton.