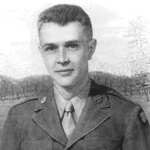 The Vanderbilt Bill Wilkerson Center, located in Nashville, TN, is named for the son of the founder, Dr. Wesley Wilkerson. Bill Wilkerson was killed in the Battle of the Bulge on 12 January 1945, at the age of 19.

The 87th Division was pulled out of the Saar Basin on December 23. It was a cold, barren place with copses of woods concealing enemy machine gun emplacements and tanks, deadly for foot soldiers. We were positioned on the right flank of the Third Army. We were glad to go. It was rumored the Germans had broken through the American lines somewhere to the north.

With full pack and rifle, we carefully went over the side of our cross-channel ship and worked our way down the cargo net to a landing craft (LCI) heaving alongside the hull in the long harbor swells of Le Havre. We were instructed to leap in the boat as it fell in the trough. With rifle and full pack added to our body weight, if we landed in the boat as it rose in the swell, you could break a leg.

Speech at the Rochefort Reception

The following speech was made at the Rochefort, Belgium Town Hall on the occasion of John being made a honorary citizen of that town on June 19, 2010. Mr. Gilbert Stevenot, who was an interpreter in General Bradley’s Headquarters during WWII was responsible for the...

Robert D. Epperson received his commission as 2nd Lt in the Air Force in 1968. After completing graduate work at Washington State University, he entered active duty in 1972 as a 1st Lt conducting research on napalm and other flame weapons at Eglin AFB, FL. Capt...
« Older Entries