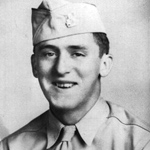 For decades after World War II, Paul Nessman pursued the casualty figures of the 87th Infantry Division which fought in the bloody Battle of the Bulge and across Europe. Month after month, year after year, the Division Statistician spent his own time and money...

I first met Lester Atwell on the Queen Elizabeth that was bouncing and cutting the waves, loaded with soldiers headed overseas on the Atlantic Ocean. Both of us from Brooklyn – I an aspiring journalist, he an established short story writer for the most...

After several days of what passed for R&R (Rest & Recreation) in Koblenz, we loaded up and climbed on trucks in the late afternoon of March 24 and moved upstream on the west side of the Rhine to the small town of Boppard. We began to cautiously filter down through the moonlit streets toward the shingled beach.

A little after midday Dec 17, 1944, Company E advanced combat-ready into the woods. I heard an explosion in front of me. Lt. Thomas of Madison, Wisconsin had stepped on a mine which threw him into the air. Company Commander Lt. J Lennon of New York City yelled out...

The enduring cold was gradually coming to an end. It was mid-March. The worst of it had been cold feet. They were numbingly cold all the time unless we could capture a village, occupy houses and build fires. If your feet were wet and cold, it was worse. Trench foot with blackened toes could send you back possibly with gangrene and amputation.