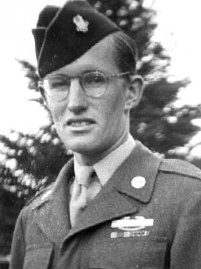 Cecil was drafted from Eagle Rock, CA and sent to Camp Wallace, TX for basic training. There he passed a test for ASTP and was sent to Texas A&M. The war worsened and he ended up at Fort Jackson, SC in the 87th. After being discharged at Camp Shelby, Mississippi, he attended college on the GI bill. He received his Ph.D. in Nuclear Physics from UCLA and now works at the Los Alamos National Laboratory in New Mexico.