May This Keep You Safe From Harm

The weather had warmed up and the sun was shining. We were giving support to engineers fixing a road. I was sitting in front of my fox hole and watching the next hill with a pair of binoculars from a German officer. I guess the sun must have reflected from them because the next thing I knew it felt as if something had hit me in the stomach hard. I thought that the .45 that I had stuck in the belt in front of my pants went off and l lost the family jewels. I rolled back on the other side of the fox hole in a small depressed place, pulled up my shirt and it looked as if someone had run a broom stick through it but I don’t remember any pain, (but pain is easily forgotten). I had just been issued a new partner and since long ago I had rid myself of any surplus weight like first aid kits, gas masks, etc. I borrowed from my partner and dumped sulfa on both ends of the wound. There was not too much blood. Found out later it was all inside. A Staff Sergeant in our group raised up to see what was going on and he got it in the forehead.

My squad leader, Corporal Bob Royce, went to get medics but they would not come, so he brought a stretcher. In the process he got his helmet shot off (I went to visit him in Washington, DC in 1968 and he showed me the helmet). He and someone else carried me back to the medics (at this time I gave Royce my .45). The medics put me on stretcher on a jeep with angle iron on front and back to hold stretchers above the driver. The driver said “hold on” but there wasn’t anything to hold on to! We went down the hill to our Company Command in a house somewhere. Found out later that it was Friedewald, Germany. Top Kick came out and looked at me and said “Damn not another one.” Then I was loaded in an ambulance. It had slots on either side to hold stretchers. I don’t remember how many but it was full except for one place on the bottom. We took off. The guy above me asked if I had any cigarettes so I lit one and handed it up. No more conversation that I remember. And how long we traveled I don’t remember either.

Finally we arrived at a two story building (found out later it was 103 Hdg Evac. Hospital). It had an outside wood stairway. I was carried up. The room on the second floor was all open, no partitions. Cots all along both sides and in the middle, operating tables. I was placed on a cot on the right side as you go in. The medics asked if they could have my clothes as there were new overshoes, combat boots and all. Every once in a while they threw new clothes to us and I always changed and put the clean on the inside and the dirty out and threw one outfit away. Had three layers, long handles and all. The outside was always black and shiny (wool OD’s). They took all my belongings. I never lost consciousness until they put me out to operate. I don’t remember how long before I was operated on. Seems as if there were a lot of things I don’t remember! When I came to after the operation, on my right side was a German officer who could speak English and on the other side was another German, (I don’t know what rank), who could not speak English. Both did nothing but bitch all the time. Tried my best to get out of bed so I could get rid of two more of the enemy but sorry to say I did not succeed. It wasn’t long before they were taken away. Don’t know how long I was there but just before I left I was brought everything I had on me, which was considerable. 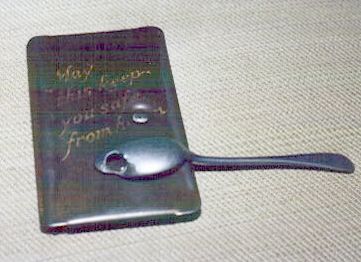 Bible and spoon with bullet holes

The first thing they showed me was the Bible that my oldest sister sent me with a metal shield on the front inscribed “May this keep you safe from harm”. There was a bullet hole in it. The spoon that I had in my field jacket also had a hole. The medics said that the bullet evidently went through the metal shield and hit the spoon behind, it went through the spoon and the curvature of the spoon deflected the bullet because the bullet had been slowed enough so it went across my body through rib, liver, lower lobe of lungs, and out the other side instead of through my heart (they were amazed). The bullet missed my stomach and intestines so I didn’t have to have a colostomy. Don’t know how long I was at this place, my treatment was the best and they even went out and scrounged up eggs for us once in a while.

When I was well enough to travel they put all my stuff in a bag and laid it on my stomach, and said goodbye. I went to an evacuation hospital which consisted of tents open at the side with row after row of stretchers inside (occupied, of course). An airstrip was next to the tents, with C47’s landing, filling up and taking off. I was there for three or four hours then my turn came and off I went for England. What part I don’t know. The hospital was a little more modern. It was made up of Quonset huts. One line for the walkway and on either side the huts were stretched perpendicular with enough room between rows for light and ventilation. Each row was about two blocks long with beds on either side. You hear morale is bad in hospitals but it was not. Everyone was happy to be out of the shooting. For example, (and there were many more) across from me was a fellow infantryman from Alabama, cast from neck to hips, all shot up with machine gun slugs. Everyday they went in with a long needle and drained his lungs of blood as they kept filling up. He was one of the most jolly. He died after two or three days. I finally could get up and walk. They put me to work as with all ambulatory patients, emptying bed pans, making beds, even mopping floors.

One evening after VE Day, they had a party for all who could walk. A lot of the local English women baked some cakes, we ate some and five were raffled off. You put your name in the basket and then at the end of the party they had a drawing. Of all things I won a big chocolate cake. Took it back to my ward and the nurse cut it up for the ones in bed and also with her own money bought Cokes for everyone. It was quite a party. I was getting back my regular strength again, and they asked me what hospital I preferred to go to in the States. Leavenworth, Kansas was fairly close to my hometown of Kansas City, Missouri, so I designated that as my choice. I ended up in Van Nyes General Hospital in California. So much for being close to home. All the time at Van Nyes I did physical training and ate a lot. It took quite some time to get back all that I had lost. Only weighed 135 lbs. when I arrived, down from 182 lbs. when I went into combat.

Don’t have any dates for all of my transfers, maybe they are listed some place. Time came for me to go home on leave. Went to the airbase and caught a ride on a C47 going to Kansas City. The seats were side seats the whole length of the cabin. Both sides were really rough and vibrated a lot, also up and down turbulence, but we made it with several stops. When we arrived at Kansas City I took a bus home. The rest is history.