The following article is ©1999 by The Herald-Palladium of St. Joseph, Michigan, and is used here with permission. While we are required to run the article unedited, it should be noted that Pfc. Hennessey and Lt. Compton were in the 345th Infantry Regiment, not the 475th as stated in the article.

“It’s ironic,” he said, nodding to the beautiful fall foliage. “The trees were just like this in the Ardennes” at the start of what would become the brutal Battle of the Bulge in late 1944.

Compton and Hennessey were both part of Company E, which was part of the 475th Regiment of the 87th “Golden Acorn” Infantry Division, one of several to fight in the historic World War II battle. Compton, who died in 1984 after operating his thriving construction business in South Haven for nearly 40 years after the war, was the platoon commander. 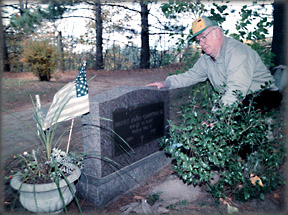 After all these years, Hennessey still visits his commander’s grave out of respect whenever he and his wife, Dolly, are near South Haven. They’ve been back close to a dozen times since 1982, and always stay with Compton’s widow, Marty, when they’re in town.

It’s a bond between soldiers that has lasted decades, through the trials and joys of life to the solemn remembrance of death.

“We come up here and pay respects,” said Hennessey, who calls Compton “Hank.” “He was a wonderful man and a wonderful soldier. I will always remember him.”

The E Company was delivered into the jaws of battle one chilly night in December 1944 shortly after the Germans punched through the Allied Forces in the Ardienne forest region of Belgium, severing the allies into a northern and southern front. The E company was brought in as reinforcements following massive allied casualties in the first few days of the Battle of the Bulge.

“They brought us up in open trucks,” Hennessey remembers. “And boy, was it cold!”

After hunkering down for an extended battle, allied forces eventually evened the score and were able to form another united front that began the final push into Germany. The end of the Battle of the Bulge marked the start of Hitler’s Final 100 Days.

But the danger and the intense fighting was far from over, as both Hennessey and Compton would soon find out.

Not long after that, in February 1945, Compton was injured and Hennessey would not see him again for another 28 years after that.

Two weeks after Compton was injured, Hennessey was also injured in combat. He still has shrapnel in his skull today from that wound.

Henry Compton earned many awards during his years of military service, including the Silver Star, the Bronze Star and the Purple Heart.

It wasn’t until 1973 that he and Hennessey would be reunited, far from the battlefield at a Golden Acorn reunion in Valley Forge, Pa.

“It was instant recognition,” Hennessey said. “Hank said, ‘Hey I know you!'”

The Hennesseys first visited the Comptons in South Haven in 1981. Three years later, Compton died at the age of 64.

But the Hennesseys have kept coming back.

Why have the bonds between soldier and commander stayed so strong, for so many years, even after one man’s death? It may be something only a soldier can know, Hennessey said.

“You lived together, and you could have died together,” Hennessey said. “It was a buddy system. See (the film) ‘Saving Private Ryan’ and you’ll see what I mean.” 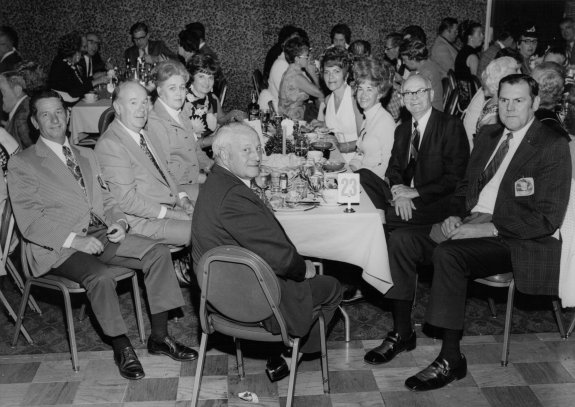