The Western front was quiet and soldiers were at rest
They took time out from battle having done their very best.
The tired and the wounded, now at recreation time
As replacements troops arrived, to fill the battered line.

The skies lit up one early morn, from the blasts of German guns
The Panzer Troops were breaking through, on another Blitzkrieg run.
It was operation CHRISTROSE, Hitler’s hidden secret pawn.
The sixteenth of December, a cold DECEMBER DAWN.

The Outposts were alerted on the thin defended front,
Brave soldiers stood their ground but soon were over-run.
It was the beginnings of a battle, hereto not divulged.
It was “A TIME FOR TRUMPETS” – THE BATTLE OF THE BULGE.

Peiper and his KAMPFGRUPPEN led the foe’s attack
The Tiger tanks and Grenadiers drove the Allies back.
Model and Manteuffel let the Wehrmacht on a ruse,
It was Rundstedt’s Last offensive to reach the river Meuse.

Now Eisenhower’s Lieutenants rushed to halt the German flow
There was Middleton and Hodges and the Corps of Len Gerow.
There were armored tanks with infantry fighting by their side
And bridges blown by Engineers to stem the rushing tide.

The noise of battle sounded throughout the dark ARDENNES
The purrs of churning motors and the tramp of marching men.
Armor clashed with armor on the roads to gain the towns
The G.I.s met the Grenadiers to hold the frozen ground.

Winter days were harsh that year, with temperatures so low
The bitter cold that claimed the troops became a soldier’s woe.
Hip-deep snow and ice slick roads proved the Army’s bane
But non-the-less with Stamina the G.I. staked his fame.

The battle raged from town to town, to Stavelot and St. Vith,
The armored columns turned their tanks to face the Nazi myth.
This was the German “waterloo” as Peiper turned about
His Kampingruppe columns shattered and Panzer tanks en route.

On Christmas Day in Bastogne, McAuliffe’s troops prevailed,
The ‘Battered Bastards’ held the town while help was on the trail.
Armor-men and Infantry came to join the bloody fray
The hurrying Fourth Armored arrived to save the day.

The clouds above cleared that day, Our planes were in the skies
Supplies and ammunition dropped – A Christmas Gift surprise.
Now Patton’s Best came from the West to end the German thrust
The BULGE was closed by Stalwart men who gave their very best.

A liberated people, now toast those Battling men
Who paid the price for Freedom in the woods of the ARDENNES.
The Battle won by Stamina of youth who stood so tall
Winston Churchill said it, “The Greatest of them all.” 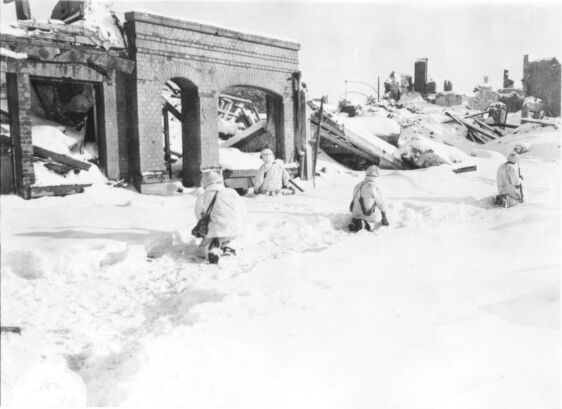