In early March, 1945, the impatient Gen. George S. Patton couldn’t restrain himself; he wanted to drive farther and faster into Germany.

After breaking out of Belgium and Luxembourg, Patton aimed to catch the enemy offguard and ultimately to ford two key rivers, the Moselle and the Rhine.

So Task Force Muir was born.

Not only the first of its kind, Task Force Muir created the model for subsequent Third Army task forces. Hardly anyone, including Patton who materialized to outline the mission to Capt. John E. Muir before its departure, could imagine that the mixture of foot and mechanized troops drawn from 87th Infantry Division would experience a movie-like melodrama along the way. Nor could anyone believe how successful the probing unit would be. 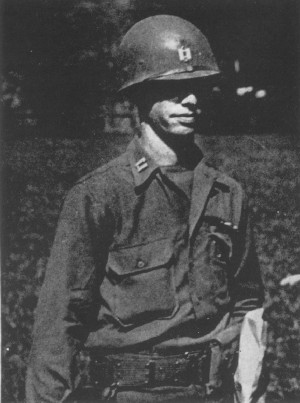 It was 7 a.m., March 6, 1945, when Capt. Muir, a stern, newly-promoted First Battalion officer who still wore his captain’s silver bars, launched the Task Force at newly-captured Newreuth, Germany. It was Capt. Muir, the slight, baby-faced Iowan, who picked most of the members of the Task Force, including soldiers of Co. A, 345th Infantry; tanks of Co. A, 735th Tank Battalion; 87th Division Reconnaissance Troops; Co. C, 607th Tank Destroyer Bn., and the Tank Destroyer pioneer platoon.

With infantrymen straddling their vehicles, the force ground its way toward the town of Steffeln, quickly encountering large piles of logs guarding the town. Two rounds of 75 mm artillery dispatched the logs, but the sounds also accomplished something unwelcome — they alerted snipers.

Once within the village of Steffeln, the infantrymen dismounted the tanks and began systematically searching houses, including some which displayed white sheets, until they neared the east end of the village. There, a machine gun hidden in a house opened up. While the infantrymen took cover, a Tank Destroyer was directed to the scene, located the machine gun and fired, destroying both the house and its sniper occupants.

Witnessing this, a total of 19 enemy soldiers filtered out of other houses with their hands aloft.

Once again the infantrymen mounted tanks, the reconnaissance troops started their jeeps, and again the Task Force, with Capt. Muir’s tank, including Sgt. Earle Hart of Co. A, 345th Infantry aboard, serving as the lead vehicle. The tank noises must have alerted the Germans because, on entering the village of Lissendorf, five German soldiers threw up their hands to surrender.

Wasting no time, the Task Force drove on to the west bank of the Kyll River bridge. No sooner had the lead tank started to cross, than the wooden bridge detonated, its debris blowing straight up, completely missing the Americans, and landing back in the river.

The explosion occurred so dramatically (if prematurely), it could have been written into a Hollywood movie. Undoubtedly the event didn’t trouble the stern Capt. Muir, who characteristically directed his units to keep pushing, using the debris as their bridge across the river.

It had been a dramatically close call, but the Task Force, now even deeper into Germany, was more concerned about events developing around it: large enemy forces were massing. Movement toward the village of Lissendorf also began stirring enemy artillery and mortar concentrations from the vicinity of another village, Birgel, causing both wounds and deaths among the advancing troops, and forcing the Americans to take temporary shelter.

Reinforced at this point by fresh troops, the Task Force began sustaining casualties at an enemy roadblock. Four of the casualties, two of them killed, had been struck by sniper and mortar fire. When the Americans closed in and finally captured Birgel, one prisoner taken was a civilian youth holding a small-bore rifle. Sgt. Hart identified him as the sniper who had been firing from a house bordering the woods where several A Co. soldiers had been killed or wounded.

Capt. Muir next ordered one platoon of tanks, infantry and reconnaissance troops to proceed to high ground north of Gonnersdorf, from which enemy troops were observed moving into a nearby woods. The lead American tank fired a succession of rounds into those woods to keep the enemy from reinforcing its troops.

At this point, responding to orders from the 87th Division, the second battalion, 345th Infantry, replaced the first battalion as point units; Cos. A and B promptly re-crossing the Kyll and establishing outposts on the west side.

Using the excellent roadnet, newly-assigned elements of the 312th Engineers, another 87th Infantry Division unit, materialized, and in a few days the Engineers had replaced the crushed wooden bridge with a treadway-type steel span, enabling several newly-joined units to cross the Kyll River unimpeded.

With its fresh replacements, Task Force Muir II, as it began to be called, had gained a few hundred yards east when it came to what appeared to be a minefield outside the village of Wiesbaum. As it turned out, that was a Nazi trick: the enemy had planted empty mine boxes in the road.

Freshly-arrived 87th Division units replaced weary units of the Task Force, and they helped to kill nine Wehrmacht soldiers and take 38 prisoners. Scores of other Nazis were forced to flee. According to the 87th Division history, published in 1945, as Task Force Muir pushed forward “the enemy had been running now for five consecutive days”. In 2 1/2 days and two nights, the 345th Infantry Regt. had bulled its way 15 miles deeper into Germany, bringing the Third Army within striking range of two broad, key rivers: the Moselle and the Rhine.

Once across those, Germany would be fatally slashed at the waist.

Capt. John E. Muir was commander of D-345 during basic training in Fort Jackson, S.C., as well as overseas until February 1945, when he was elevated to the Battalion staff. He was later promoted to Major.