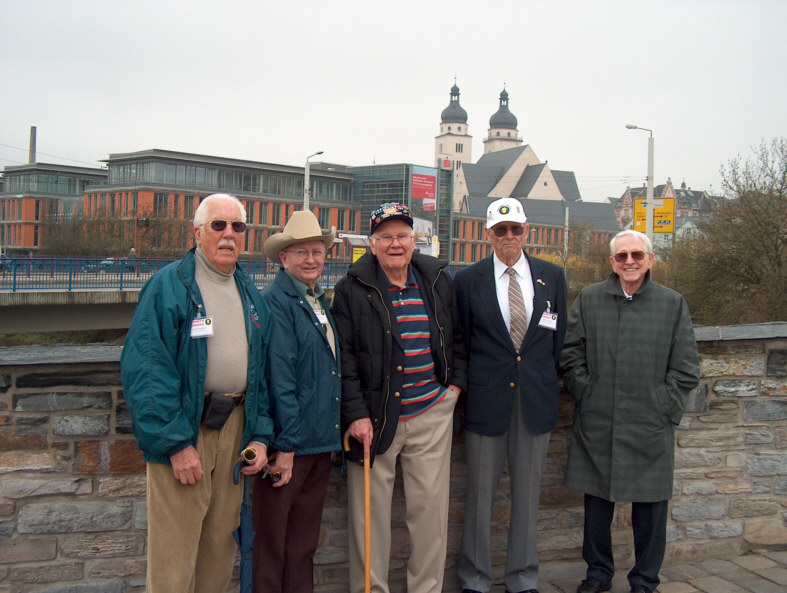 The return of WWII veterans of the “Greatest Generation” to former battlefields is always dressed with a lot of emotions and memories. For many US units, the war ended in the Eastern part of Germany, prior to the encounter with Red Army units at the Elbe River.

From Friday, April 16th until Sunday, April 18th, the “Liberty Convoy” drove through the Plauen and Vogtland region, where once the 87th “Golden Acorn” Infantry Division fought within the ranks of General Patton’s 3rd Army.

During the three day tour, around 40 WWII old-timers gathered near Plauen and followed the path of the 87th Infantry Division. With them, five veterans as well as relatives joined.

Gene Garrisson, Jesse Bowman, Eldon Gracy, Tom Burgess and Tom Stafford belonged to the “Golden Acorn” that was active in the region during the last days of WWII.

Crossing the heartland of Thuringia mid-April 1945, their division fought on towards the border of Czechoslovakia.

For the many crowds that gathered over the three day event, the encounter with the veterans was overwhelming. Many older people still vividly remembered the GI’s of the 87th and the valiant actions that they performed.

The “Liberty Convoy” stopped at various historical places, such as Mehltheuer, where during WWII a factory, that housed almost 350 mostly Jewish women as forced laborers, was used as a sub camp for the infamous Flossenbürg concentration camp. There a short but emotional ceremony took place.

Over the next days, it was especially Tom Stafford who became the center of attention during the many ceremonies in various locations. Tom, in 1945 a squad leader in a rifle company remembers: “We reckoned that there would be much more stiff resistance. We got told that Hitler would use youngsters and a secret weapon against us.”

In Plauen, a plaque was unveiled, remembering the actions that Tom Stafford took, thus saving the Elster Bridge from destruction. All veterans received a special painting called: “Brücken verbinden – Bridges connect”. Also present was General Consul Katherine Brucker, who joined the veterans and enjoyed the tour, while driving along in one of the WWII old-timers. 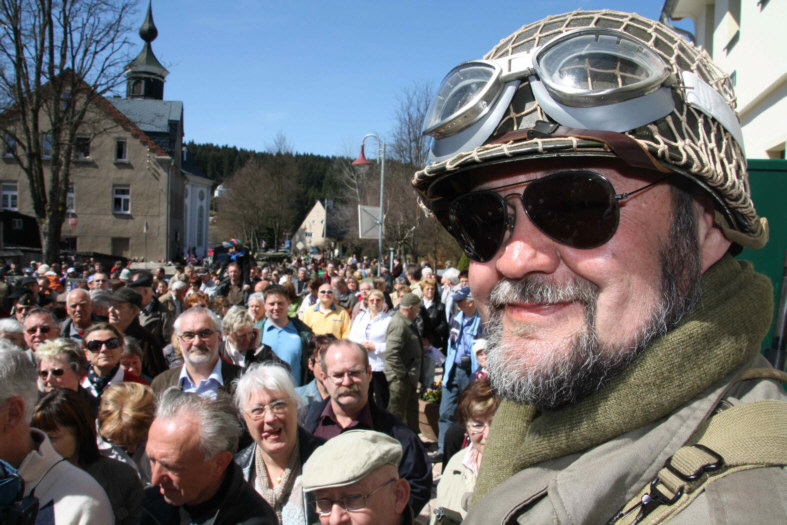 So many interested people in Carlsfeld on Sunday. Andreas Bräuer (Organization Team) smiles and is happy about the success of the event

In Carlsfeld, deep within the forest of the Vogtland Region, a massive crowd awaited the arrival of the “Liberty Convoy” and the veterans. During the last days of the war, Tom would become a true hero, saving thousands of American and German lives. He single-handed conducted the surrender of 40,000 German soldiers, promising them that they would not go into Russian captivity. The Wehrmacht commanding general then accepted Tom’s proposal, despite his young age and lower rank. Tom had outsmarted them by stating that he was a captain, as NCO’s and officers didn’t wear their ranks visibly in fear of German snipers. Thus he saved not only many lives on both sides, but also preserved Carlsfeld from bitter fighting that might have occurred.

The last part of the “Liberty Convoy” then moved on towards Kraslice in the Czech Republic, where once again the veterans and the participants of the convoy were welcomed by the mayor of the town.

The “Liberty Convoy”, organized by Andreas Bräuer and Rolf Ballhause achieved its goals with diligence: “remembrance and reconciliation”.